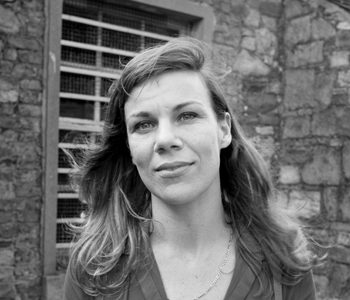 Ailbhe Ní Bhriain's practice combines film, computer generated imagery and sound to create a dream–like world and an altered experience of time and place. The films, usually staged as immersive gallery installations, combine imagery from disparate but archetypal locations: a museum of cultural artefacts, a generic office, a post–card landscape, a library, an airport etc. The locations invariably refer to aspects of collective or cultural identity, but the films seek to disrupt our familiar reading of these spaces; the introduction of unlikely elements such as birds of prey, air-borne debris and rippling water transform the sites into an unsettling strangeness. Resembling stage sets of a kind, it is left unstated whether these are imaginary ideals in the process of being constructed or the remnants of a place or vision come undone. The work considers large subjects such as imperial legacy, environmental damage and human displacement but avoids directive or documentary positions; it does this through the production of highly mediated visuals, verging on the surreal, and an associative approach to narrative.

The films are characterised by a slow pace and employ either a stationary camera position or continuous tracking shots. They are combined with commissioned or collaboratively produced abstract soundscapes and, more recently, voiceover. Scripts for voiceover are produced from collaged fragments of archival texts, stripped of specific reference to become deliberately nebulous. Her photographic work similarly combines imagery from various cultural archives and archetypes, but, in contrast to the labour–intensive CGI of the films, prioritises loose digital collage. This work operates in series–form and across a variety of scales and surfaces, including large–scale jacquard tapestry. Staged in combination or independently, both photographic and film work share a central exploration of the constructs that underpin collective identity and representation itself.