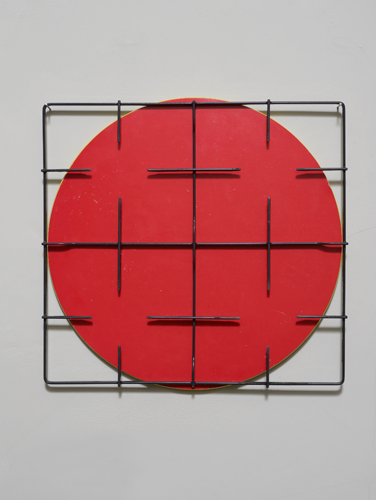 In 1897, Alexander Graham Bell was elected president of the National Geographic Society and wanted to produce a magazine that appealed to a wide range of people, not just the scientific elite – and he insisted on 'pictures, and plenty of them – the world and all that is in it, is our theme, and if we can't find anything to interest ordinary people in that subject, we better shut up shop and become a strict, technical, scientific journal for the high class geographers and geological experts.' Hirst's installation 'the world and all that is in it' echoes and applauds this ambition by looking at the relationships between language, image and happenstance.

When I was a child, two things especially used to bother me a lot. I had heard that a giant squid could blanket Piccadilly Circus and if we pulled out our intestines they would reach the length of a tennis court. At Art College I was told to make it bigger. Later I learned that there are more atoms in a cup of water than there are cups of water in all the oceans of the world.

These objects pack power, but writing about it is well nigh impossible. What is really noticeable is that Hirst understands metaphors. She can summon and control them. This is a rare gift. What she seems to do is this: she suggests a number of possible metaphors, but fulfils none of them. At the same time she ensures that they are coherent one with another. This sets up a kind of magnetic field of associations in which (the viewer feels) the imagination is held, as if suspended, or floating. And in this way the work's subject becomes not just the connections, but the very idea of connection itself. This in turn becomes metaphorical: it is about language, and human relationships.

Known for her subtle and elegant work employing a variety of media, Hirst's art is perhaps best described as an exploration of serendipity that can occur in unintended and unexpected places. Her sources may be particular objects or certain words whose meaning she may subtly shift by manipulation or juxtaposition. Hirst's output is multifarious, including drawing, sculpture, etched glass, collage, printed text and photography. While avoiding simple categorisation, Hirst's art is always characterised by a measured stance and sensitivity towards materials.

>Shop: 'The World And All That Is In It' editioned multiple, and other offers.

>Something and Nothing at Thames–Side Studios Gallery