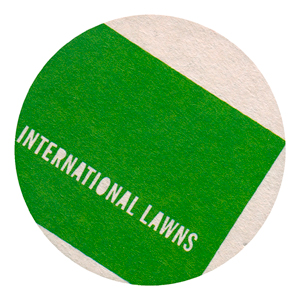 (NM) and (AC) have been working together creatively since 2008 and decided the time was right to formalise a partnership. Both come from backgrounds involved in the production of printed matter, both for commercial and fine art purposes. Monro’s experience began in the pre and early digital period of the 1980's whereas Curtis' is of the last 15 years or so. Although they share views on approaching work, pushing an idea beyond their preconceptions is only possible through the resolution of a healthy battle.

Driven by a fascination and respect for the history of brand management and corporate identity, the design group INTERNATIONAL LAWNS undertake projects both by commission and personal motivation. Although as a design group that specialises in the working and reintegration of decommisissioned logotypes, the research leads into areas of display and façade that inform the work produced.

INTERNATIONAL LAWNS is also the name of a tennis centre in Eastbourne, something the founders were unaware of when they decided on their name. The name came from research into the function of the garage door beyond its primary purpose. They saw the seasonal repainting of its surface as the nearest most people will come to taking on the history of high modernist mid–century abstraction, in a contemporary suburban context. Only a short leap took them to the well–kept lawn, another means of displaying one's aesthetic values.

Both Monro and Curtis live in the suburbs, Niall in West London and Andrew in Cliftonville, Margate. They see them as the neutral space between nature in the countryside and the man–made city centre, a place where the subtle aesthetics of lawn care or garage door painting can flourish.