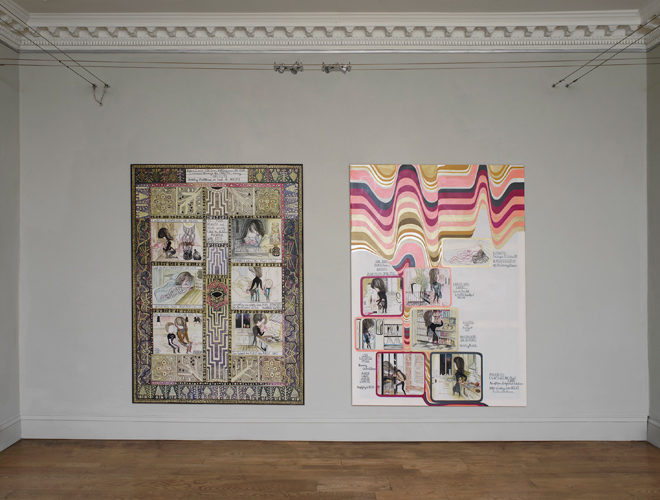 Domo Baal invites you to 'Step Inside Love' a solo show by Emma Talbot. This exhibition opens with the 2015 edition of London Gallery Weekend, focusing on contemporary art exhibition spaces in London EC1 & WC1. Talbot is also presenting her first solo show in Germany 'Memories turn to Dusk' at Petra Rinck Galerie, Düsseldorf.

The large format paintings on canvas are broken up by small discrete windows revealing certain key episodes. Small format stories, images and text fragments in no particular order are loosely connected together leaving empty spaces by which means Talbot invites the viewer in, to fill and complement the overall visual experience. In the ongoing series of three–dimensional forms 'Intangible Things', presented in both exhibitions, Talbot's approach to drawing is extended into the material properties of fabric and papie–mâché. She uses the language of the hand–made with immediacy, to give psychologically driven thoughts and ideas a physical presence.

Individual scenes are developed further in running ornamentation or placed in geometrical compositions. The artist obscures the identity of her protagonists by offering anonymised faces. Missing walls or empty spaces in exquisite exotic carpets give the viewer literal access to the hidden secret world of the unconscious.

Text fragments introduce their own idiosyncratic typography and are reminiscent of religious texts, comic books or perhaps just notes written in the margin of schoolbooks. These notes on their own – separated from accompanying images – become a commentary on the life lived and the deliberate spelling out of these notes develop into a visual language that is strangely life–affirming.

We are also delighted to announce the publication of a new print edition produced by the Coriander Studio. Emma Talbot's folded 'Sex Fantasy' on Japanese Paper (95×62cm/37.4×24.4in on Atsu Unryu 50gsm, edition 90, 2015) from her ongoing 'Sex Fantasy' series of unique folded drawings on Japanese Paper – is available from both galleries, folded and presented within or without a bespoke slipcase.

Petra Rinck Galerie is exhibiting Emma Talbot's work at Art Brussels from 24 to 27 April. In Spring 2016 Talbot has been invited to present a solo show at The Freud Museum in London. Her work is included in the Thames and Hudson book '100 Painters Of Tomorrow' and is featured in a new publication by Roger Malbert for Thames and Hudson called 'Drawing People'. Her work was recently included in the 'Birmingham Show' at Eastside Projects in Birmingham, curated by Gavin Wade and Ruth Claxton.

>Review: 'A Rare Egg in the Nest: The Outlandish World of Emma Talbot' review of Emma Talbot's exhibition 'Memories Turn To Dusk' at Petra Rinck Galerie in Düsseldorf, by Magdalena Kröner published in the Frankfurter Allgemeine Zeitung – Feuilleton, 4 April 2015 (German with English translation)