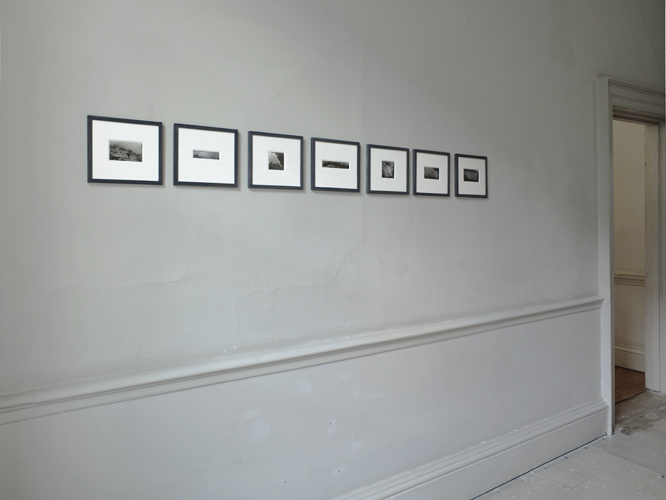 To those concerned with beauty and truth, the world can seem an ugly place. You're backed up against the wall and Shangri–la is ever so far. It's getting mighty late, so go on, abandon your date and follow the white rabbit in, out of the grey.

Peter Linde Busk likes the deviant, folk art, children's drawings and Pablo Picasso: This is me, yo, right here. Stephen Dunne doesn't believe in black magic or voodoo dolls, he can't cast spells, and he certainly can't break them. But I'm not going to start explaining the twist in my gut or the tickle I've had in my throat for the past few weeks. And I don't want to talk about the little locks trimmed from my hair while I sleep. I just don't want to talk about it. In Ailbhe Ní Bhriain's work serial experimentation and failure collapses into new possibilities using methods most usually reserved for post–production; layered videos construct new fictional worlds, ones which we know to be impossible yet somehow evoke back–rooms we are sure we once glimpsed behind the curtain. Sharon Kivland frames details of the smoke of steam engines in a homage to Freud and his brother Alex, who was able to reel off pan–European train timetables with startling alacrity. Since I could only see the headlight of the locomotive in the distance, I had no idea until the flash had gone off. I never expected it. Never aimed for it. All I wanted was to get some nice pictures. Of trains. (O. Winston Link). Jeffrey TY Lee presents a forest scene with figures and a deer lying on the ground; a dog in the middle foreground and a deer among the grass to the right. Here there is neither object nor subject but rather a state of indeterminate in–between.

All is Pretence for Lizi Sanchez who juxtaposes the formal and the rigorous with the decorative, always challenged by frivolous additional detail, opening up considerations of purpose and function. A sculpture in its Easter Bonnet. Siân Pile gets lost The June grass, amongst which I stood, was taller than I was, and I wept. (Laurie Lee, Cider with Rosie). Shaan Syed pitches iconic black with its opposite extremes, engaging the language of spectacle in paintings that can also be read as landscape. Heide Hinrichs charts the way language shapes experience and perception. Her subtle transformations of used soccer balls re–imagines the objects as fragments existing within a larger system of relationships and perspectives: Miandra, Alyse, David, Jeff, Nolan, and Blake: America is bigger than the summer of your individual ambitions. Steve Johnson's continuing investigation into places for storytelling and revelry, places of retreat and escape takes him into the cinema: Everyday's like a film with no script. Ansel Krut is a past master at making vitriolic drawings that tap into the vein of discomfort running just beneath the skin; oscillating at ease between the cruel and the comic. Mark Prince undertakes a lengthy process of layering and erasure, using a method of imagined hand–writing and repeated drawing to create an image that proposes a suggestion of personal narrative, landscape and discovery. Felicity Powell's figurative imagery is suffused with subtle and macabre humour; the images have the wonder and strangeness of exhibits from a cabinet of curiosities. Mhairi Vari's consistently playful engagement with the properties of her chosen materials continues to yield fantastical, borderline sinister results; intricately carving the most precious and poisonous element into the base utensils of manual labour: nails, screws, lynchpins, one milk and two sugars please, in black and white.

With many thanks for the music to the Shangri–Las