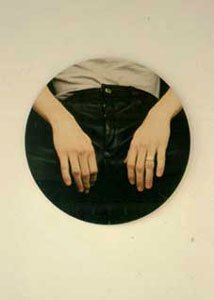 Sharon Kivland investigates how our lives are governed by systems of order that complement, overlap and contradict one other while undergoing continual periods of change. Spheres such as language, time, philosophy, politics, nature and history are involved. The focus of this approach is represented by the identity of a woman and her body. The site where sense is made of it all is palpable in the titles of the work as the presence of an individual speaker, in the possessive pronoun 'mes'. The viewer encounters a private lexicon, whose poetic basso continuo is modulated by the rich philosophical background that shimmers through allusively.

Mes Fils, from which the exhibition takes its title, includes a continuing series of photographs, each showing the same woman in an embrace with a different man. Closer inspection reveals that the woman is much older than her partner, old enough, in fact, to be his mother. The work engages with the Oedipus complex and its resolution in prohibition, when the son must renounce his desire for his mother. The way in which each child navigates his passage through the Oedipal relation will determine both his assumption of a sexual position and his choice of sexual object. For the analyst Jacques Lacan, it is a passage to the symbolic, one that passes through a complex sexual dialectic. Here no father intervenes, however, to impose his law and to separate mother from child. The scandal is evident, and there is a further underlying transgression in the work. As the series continues, the woman – the artist – gets older while the men (all former students of Kivland) remain the same age. They are, however, completely interchangeable, while she is constant and singular. In the same series are several other works that also take up the themes of prohibition and transgression in an atmosphere of elegant refinement.