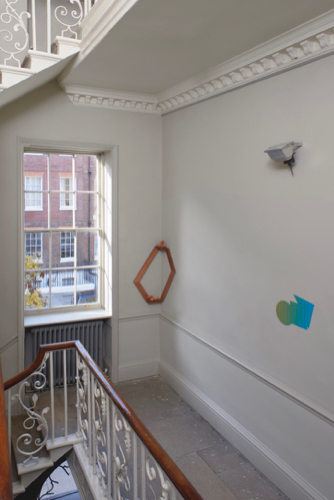 The world of getting things sorted out. They never belonged to that world. It felt small–minded to them. Back then it did. Now they do belong more to that world. Never thought they would. Neil Zakiewicz too. Back then he seemed more shoulders and shrugs, quips and ankles and artless antics than tactics and frowns and wrinkles. The Pixies playing Brixton Academy circa 1990. Him waiting for them to do Velouria would be my guess. Circa 1997 a solo show at Unit in Bethnal Green. Perhaps his first. All I know is I didn't get it. Was the not getting it meant as how to get it? Maybe this chancer doesn't believe in the world of sorting things out, I thought – after all, some don't, and they still have lives. Later came full–wack sculpture. Fun, bonkers, parodic. Fat hunks of foam handled like and not like how a classical sculptor would handle a block of marble. Comedy monumentalism: ingenuous, infantile and pretend grandiloquent. And life went on. And other lives started beautifully or ended too soon. At Stuart Croft's funeral Neil and Jo looked shaken and we all cried our eyes dry. And life went on. People did and didn’t change. Neil's Deptford show in 2014 recast him as a painter. Yes still bonkers, yes still fun but not parodic now, I thought. Paintings with hinges that functioned as the templates for their own sprayed forms. Christ, I thought, is he sorting things out now? Is this a strategy? Yes and no. NZ had crashlanded on Planet Formalism with enough food and supplies for a long stint but no chart and only fragments of a backstory. Was this hilarious or daft or seriously procedural? Or all of the above? Was it sorting things out or pissing them around or both? No grace under pressure to imbibe here but gallons of performative contradiction. Not exactly 'Box with the Sound of Its Own Making' but assuredly 'Panel with the Hinge of Its Own Masking'. And life went on and grew and blossomed and diverged. One blessedly sun–honeyed morning in September 2018, arriving at NZ's disconcertingly ordered studio out towards the Olympic Stadium, I fell. Fell like hard rain for the new work. Extruded tubular coils of terracotta placed deftly on angular hardwood shelving shapes. Not exactly early Carol Bove, not quite young Haim Steinbach, not quite 'Dry Shift' out to lunch, not quite archaeological display for shards of Roman kitchenware, not quite ceramic pythons or archaic drainpipes or terracotta faeces or tenderly deformed topologies, not quite pre or post history, but circumstantial evidence for all the above. No blanks at all to fill in but offers of fullness to blank out. Were things sorted out now? Or pissed around? I couldn’t tell the difference any more. That’s what turned me.

>Neil Zakiewicz: Working, text and list of works as pdf

>AN: The Week's Top Exhibitions